The Ürümqi massacre had a profound effect on the local Uyghurs, completely destroying relations with the Chinese Hans. After the massacre, Chinese state has completely lost its legitimacy among the Uyghurs.

Every people has special days to celebrate or remember in its history. As a people, we Uyghurs have too many special days to remember rather than to celebrate. July 5th is one of them. On this day before 13 years, Uyghurs were brutally massacred in the capital of their homeland, Ürümqi by Chinese occupying army and its colonialist people. Uyghur diaspora all around the world held varieties of activities to remember the day every year.

On July 5, 2009, a group of Uyghur students gathered in a park in Ürümqi, the capital of East Turkistan (called Xinjiang by china as a colonial name), to ask the government to give explanation on the killing of Uyghur workers in Shaoguan, a city in southern China. The peaceful protests turned into violent ethnic clashes between Uyghurs and Hans as Chinese police attempted to crack down on the students. Then the occupying Chinese army (PLA) and the colonialist Chinese people (Hans) carried out a large-scale ethnic cleansing against the local Uyghurs. During this, tens of thousands of Uyghur youths were killed or disappeared without any traces.

The Ürümqi massacre had profound effect on the local Uyghurs, completely destroying relations with the Chinese Hans. After the massacre, Chinese state has completely lost its legitimacy among the Uyghurs.

The massacre maybe means just an event or riot to most of the people in the world as China describes. But, to us Uyghurs, it means a lot beyond being only a protest and Repression. So the day it happened has special meanings for us.

July 5th is a day that Countless Uyghur youths were brutally killed and disappeared by Chinese police, soldiers and civilians. In that day, the Chinese, army and civil alike, revealed their true faces and proved that they are an occupying forces. As a result, the Uyghurs also truly realized that they are colonized and sincerely wished to have their own independent state.

July 5th is a day that Uyghurs united in the fight against aggression as a nation, regardless being male or female, rich or poor, religious or non-religious. It’s also a day that Hans felt they are Chinese and “Xinjiang” is not China as Chinese regime completely lost its legitimacy in East Turkestan and found no refuge other than weapons.

July 5th is a day that the Uyghur people, who have been oppressed for centuries, could make their voices heard and show their bravery against oppression to the world. In that day, for the first time in history, the world widely heard and saw the plight of the Uyghur people and the struggle of them.

July 5th is a day that set the stage for today’s ongoing genocide on Uyghurs and brave struggle against it. Since that day, the Chinese state has completely lost its legitimacy in East Turkistan and decided to eradicate the Uyghurs from the land, realizing that it can no longer keep them under control with false promises, while the Uyghurs also realized that they can no longer exist without own independent state.

The day, therefore, has a special meaning for Chinese authorities, too. So they tights control of the Uyghurs in East Turkistan every year as it approaches. In the homeland of the Uyghurs, the remembrance of the victims of this day is forbidden. Uyghur teenagers in state school are being taught that the heroes of this day are “evil forces”.

China wants to erase every record of the massacre from the face of the earth. We want to preserve them and disclose them to the world.

For these reasons, we remember July 5th every year. We will never forget the day and never make it forgotten.

Challenging Tyranny at Its Heart: 13 Years Since Urumqi Massacre 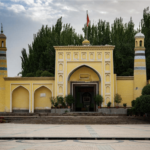