Challenging Tyranny at Its Heart: 13 Years Since Urumqi Massacre

On July 5th, 2009, thousands of Uyghur youths, mostly university students, marched in the streets of Urumqi in protest against the ruthless killing of innocent Uyghur workers on June 26, 2009, in a toy factory in Shaoguan city of Guangdong Province by Chinese workers.

Today, July 5, marks 13 years since the Urumqi Massacre, a major event that marked both a shift in the Chinese regime’s policies in East Turkistan and an awakening for the Uyghur Muslims.

On July 5th, 2009, thousands of Uyghur youths, mostly university students, marched in the streets of Urumqi in protest against the ruthless killing of innocent Uyghur workers on June 26, 2009, in a toy factory in Shaoguan city of Guangdong Province by Chinese workers.

The Uyghur youths marched peacefully to protest and demanded an investigation into the incident in Shaoguan city as well as freedom and democracy for the Uyghur people. However, the Chinese communist regime responded with violence and turned the peaceful protest into a bloody clash. The Chinese police forces aided by the military shooting mercilessly and crashed onto the protesters, who had only gone in a peaceful march. Wang Lequan, the then so-called Communist Party Secretary of “Xinjiang”, appeared on state Television falsely accusing the protesters of “violent robbery, beating, arson, and killing”.

The Chinese regime restricted foreign journalists from covering the protest and arrested founders of the Uyghur websites that called and covered the protest. Furthermore, in an attempt to block information flow from the region, the Chinese authorities banned the internet in the region for 10 months effectively isolating the region and blocking its communication with the outside world.

Following the Urumqi Massacre, the Chinese regime accelerated and dramatically expanded its colonialist policies in East Turkistan and started preparing for the genocide that began unfolding in 2014.

On the other hand, and most crucially, the Urumqi Massacre awakened the Uyghur people, exposed the Chinese regime’s lies of “co-existence”, and proved that the Uyghur Muslims can never live peacefully under the Chinese communist regime rule.

Abdulhakim Idris, executive director of the Center for Uyghur Studies said “The July 5th Urumqi massacre in 2009 stands as the moment where the Chinese regime changed its policies towards Uyghur Muslims from repression and discrimination to hunting them, a total war on Islam that turned into active genocide.”

Today, as we remember the innocent lives lost and the tragedies that happened during the Urumqi Massacre, we call on the international community, especially the Muslim majority countries, and Islamic institutions to challenge the Chinese communist regime to bring an end to the 21st century Holocaust it is committing against Uyghur, Kazakh, Kyrgyz, and other Muslims of East Turkistan and China’s war on Islam. We also call on the conscience of the freedom-loving people in the free world to call on their governments to stand up against the hegemonic Chinese regime.

We call on our fellow Muslims around the world to remember their Uyghur brothers and sisters in their prayers and to do everything within their power to raise awareness and fight to end this genocide and defend their faith as it is their crucial responsibility as Muslims. 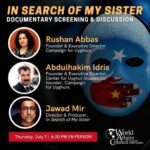 Event: ”In Search of Sister” Screening at World Affairs Council of Dallas/Fort Worth 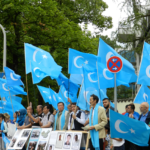