On Sunday, July 31, 2022, Muslims in London, Manchester, Edinburgh, Washington DC, Toronto, Sydney, Melbourne, Brisbane, Auckland, Johannesburg, and Istanbul participated in the international Stand4Uyghurs demonstrations held in front of the Chinese embassy and consulates to show support for Uyghur Muslims and demand the Chinese communist regime to stop its genocide in East Turkistan.

The demonstrations on Sunday have seen a great turnout from Muslims as well as non-Muslim allies in the various cities. Many Muslim leaders, Imams, representatives from Muslim organizations, and youth and student organizations attended and voiced their support and solidarity for the Uyghurs.

For a  long time, the Chinese regime wanted to isolate the Uyghurs from the Islamic world and make the Uyghurs feel that the Muslims have abandoned them. The demonstrations stressed that the Uyghur Muslims are part of the Muslim Ummah and the Muslims stand in solidarity with the Uyghurs against China’s genocide and war on their faith. The demonstrations concluded with demands to the Chinese Communist Party to stop the Uyghur Genocide, close the concentration camps, re-open the mosques in East Turkistan, end forced sterilizations, and return the forcibly separated children to their families, etc.

“Until you heed these basic demands, our protests will grow and spread, our boycotts will get stronger, our voices will get louder, and we will shame you across all corners of the earth.” The protesters chanted. “This is not just a one-day demand. This is for the rest of our lives that we will be fighting.”One Muslim youth said in Toronto.

Abdulhakim Idris, executive director of the Center for Uyghur Studies said, “When the Chinese authorities locked up the Uyghurs, they said, ‘No one will know about you, not even your God. They cannot come to rescue you’. The Stand4Uyghurs demonstrations around the globe are an answer to the Chinese authorities that the Muslims did not forget their Uyghur brothers and sisters and they stand in solidarity with the Uyghurs. I hope this awareness spreads to all Islamic countries in the near future. I hope every Muslim will learn about our plight and pray for the oppressed Uyghur Muslims every day.”

The Stand 4 Uyghurs campaign has truly voiced strong Muslim support for the Uyghur Muslims and sent a strong message to China that it cannot continue to deceive the Muslims. We hope that this campaign will continue to grow and garner a formidable Muslim resistance against China’s crimes and genocide in East Turkistan. 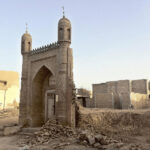 Khutbah on Uyghur Genocide and China's War on Islam 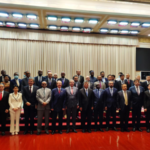