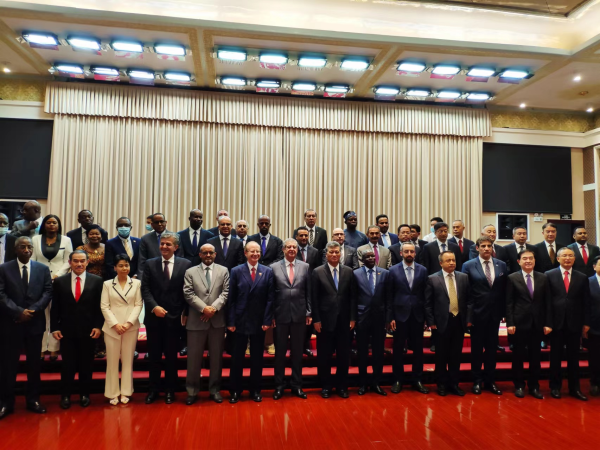 Last week, the Chinese Ministry of Foreign Affairs invited diplomats from 30 Muslim-majority countries to visit East Turkistan in an attempt to whitewash the reports of the Uyghur Genocide and China’s war on Islam. The Chinese regime has also invited Turkiye to visit East Turkistan. The Chinese state media CGTN reported that the delegation “expressed their hopes that exchanges and cooperation with the region would be deepened” and quoted Algeria’s Ambassador to China saying, “The fruit here is so sweet, just like the life of the people here”, and that he witnessed the “real situation” there, where the “rights of people of all ethnic groups are well protected”.

Furthermore, Ma Xingrui, secretary of the regional committee of the Chinese Communist Party in East Turkistan said he “believes that the envoys will have a deeper and more comprehensive understanding of Xinjiang through the visit” and hope that “they will continue to play a bridging role and introduce a harmonious, stable, prosperous, happy and beautiful Xinjiang to the international community”.

As it is clear from Ma Xingrui’s words, the Chinese regime aims to reach its objectives of deceiving the Islamic World through such staged visits and legitimize its genocidal policies against the Uyghur and other Muslims of East Turkistan among Muslims. The Chinese regime has always wanted to isolate the Uyghur Muslims from the rest of the Islamic World and make them feel that the Muslims have abandoned them. Visiting Muslim majority countries in the past such as Saudi Arabia, UAE, Malaysia, and Bahrain have been used by Chinese authorities as a pretext for sending Uyghurs to concentration camps.

Hence, it is vitally important to not fall into such propaganda and staged scenes by Chinese authorities that are known for their lack of transparency and concealing of facts. It is also critical to note that the Chinese authorities invited delegations from Muslim-majority countries to visit East Turkistan in previous years as well, whereas they have always denied Western governments and international human rights organizations’ requests for unfettered access to East Turkistan. Moreover, the Uyghurs in the diaspora are not able to communicate with their family and friends in East Turkistan in the Information Age.

On the other hand, in his recent visit to East Turkistan, Chinese Chairman Xi Jinping directed his officials to make “enhanced efforts” to “uphold the principle that Islam in China must be Chinese in orientation and adhere to socialism”. This confirms that the Chinese regime will continue to target Islam in its war on the Uyghurs.

Executive Director Abdulhakim Idris said, “As the Chinese authorities failed to deceive the international community and other democratic governments, they are trying very hard to deceive the Islamic World. The Chinese regime is afraid of Muslims standing up for their Uyghur brothers and sisters. We call on every Muslim to not fall into Chinese propaganda and try to discredit their brothers and sisters in faith who have been rightfully fighting for their human rights, freedom, and democracy. As for the Muslim diplomats who were misled by the Chinese authorities and thus echoed Chinese propaganda against Uyghur Muslims, we can only hope for their conscience to wake up and remind them to not forget the day of judgment before trying to whitewash China’s crimes and genocide against Uyghur Muslims. Also, those diplomats should meet and listen to the Uyghurs abroad who have been separated from their families for many years”.

In stark contrast to the Muslim diplomats, the Stand4Uyghurs campaign has mobilized hundreds of mosques and thousands of Muslims around the world to voice their support and solidarity with the Uyghur Muslims at the end of July. We hope that more and more Muslims will stand up against China’s crimes and war on Islam in East Turkistan and eventually fail the Chinese regime’s long-standing goal of deceiving the Islamic World on the Uyghur Genocide.