MENACE: A call for stopping Chinese repression on Uyghur Muslims 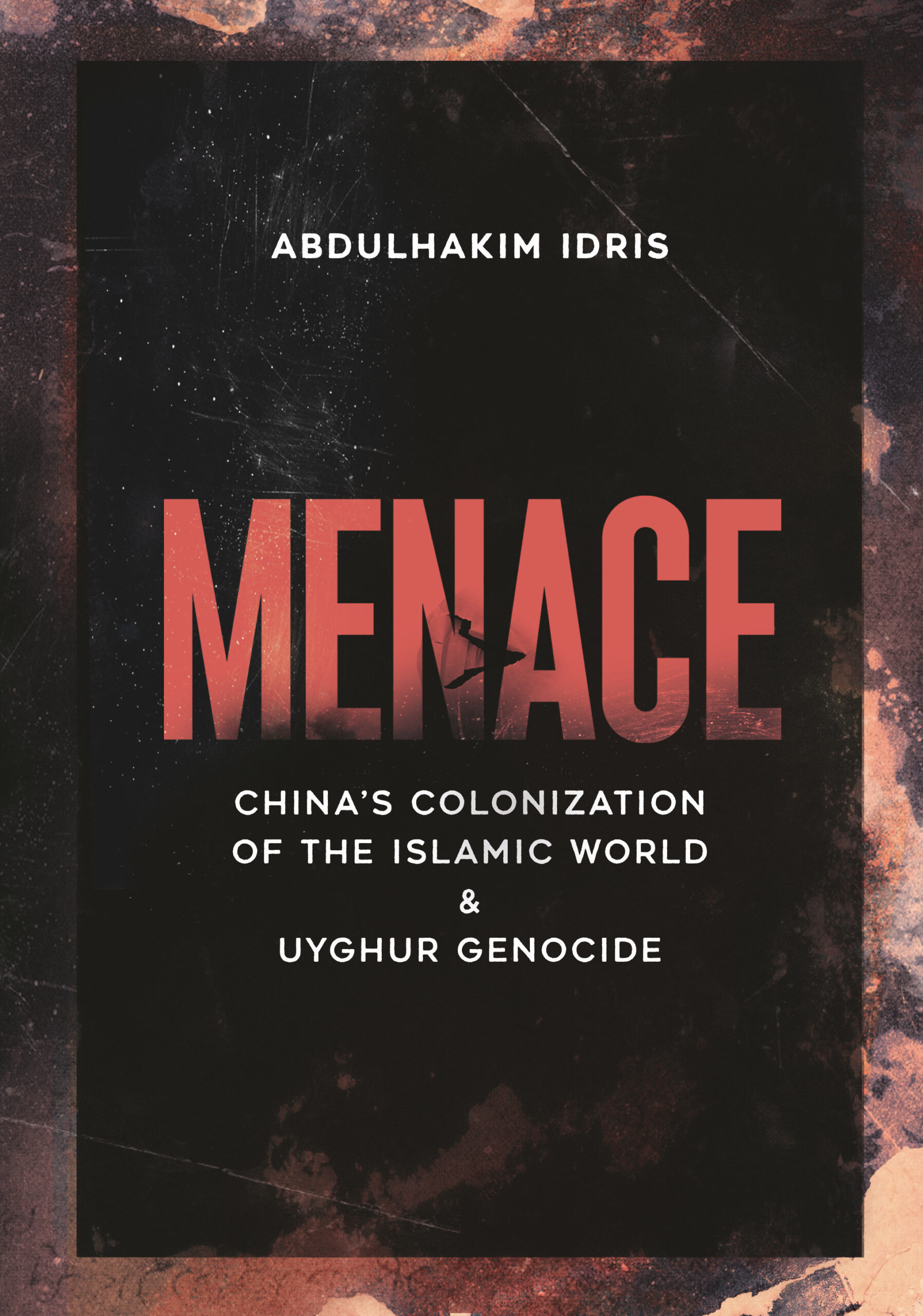 Abdulhakim Idris’s book Menace is a brave and disconcerting take on a topic that the world has grossly underinvested in. It is well known that dealing with China has been one of the most significant challenges for the international community however, real attempt to understand China from multiple lenses has been elusive. Sincere attempts to develop an informed understanding of ‘Menace: China’s Colonization of the Islamic World & Uyghur Genocide’ have been remarkably absent Educated in the underground Islamic schools of Hotan city in East Turkistan, Abdulhakim Idriswas one of the first Uyghurs to seek asylum in Europe. He is a founding member of the East Turkistan Union in Europe. A prominent human rights advocate he has consistently advocated for Uyghur peoples rights.

‘China’s Colonization of the Islamic World & Uyghur Genocide’ is one of the first rare attempts to document the systematic persecution of the Muslims within Chinese territory. The author Abdulhakim Idrisexamines the historical origins of Beijing’s neo-colonial tyranny, the persecution faced by the people in East Turkistan (Xinjiang) and how those factors relate to China’s present day relationships with countries such as Pakistan, Egypt, and Iran. He examines Chinese imperialist and colonialist ambitions from a historical perspective and sheds light on what China has done to realize them. Idris equates Bingtuan (Aka Xinjiang Production and Construction Corps XPCC) which was established after the 1949 invasion of East Turkistan by the PLA and global “investments”under the Chinese Belt and Road Initiative (BRI), across the world to colonialist policies, with Beijing maintaining monopoly over these investments. It is a cautionary account of how the world is subjected to neo-colonization under the pretense of “equal development” which ultimately leaves China as the sole beneficiary.

Idris examines the history of China, and details how after occupying East Turkistan, Tibet and Inner Mongolia, the communist Chinese regime declared these areas as its own territory and started to exploit these lands. In this the author also explains that although the PRC’s anti-Islamism is direct correlation with Chinese communist ideology, it goes back centuries to Han nationalism during the Manchu-Qing dynasty.When the Qing dynasty initiated invasion campaigns against the regions in Western China, they called the occupied lands of East Turkistan “Xinjiang” meaning “new territory” – proof that region did not belong to the Chinese but was occupied. After the founding of the PRC  in 1949 the Sinicization of Inner Mongolia, Tiber and East Turkistan were launched and have continued to this day.

East Turkistan/Xinjiang was thereafter renamed Xinjiang Uyghur Autonomous Region in 1955.After the Cultural Revolution of 1966 Uyghurs, Mongols and Tibetans were targeted for their culture and religious identity. As a result of Mao’s views of religion as superstition, Muslim societies were subjected to great persecution – copies of Quran were burned, mosques were damaged, religious scholars were forced to eat pork, and all kinds of humiliation were heaped upon the Uyghurs. Today the hopes and aspirations of the Muslim Uyghurs of East Turkistan have been completely crushed by the PRC. Neo-Imperialist China has waged a relentless war against Islam and has tried to Sinicize other beliefs like Christianity, Tibetan Buddhism and Taoism.

East Turkistan/ Xinjiang is geographically the heart of Central Asia. It is an area where nearly 300 rivers flow, rich in uranium, coal, lead, mercury, and other mineral. Total oil reserves in the Turfan and Dzungaria basins are 160 billion cubic meters. It is little wonder that China uses every kind of manipulation to exploit the region and keep the indigenous Uyghur population subservient, crushing their very spirit.

Idris’s attempt in Menace is to demonstrate the threat posed by Sino-colonial Chinese regime both to the world and Muslim countries. He states that the genocide which started in East Turkistan continues with the economic siege of Pakistan, to Iran, Egypt, and Africa by the Sino-colonial regime. The Sinification process by means of resettlement of Han Chinese and the state-sponsored capitalism carried out through them is also progressing in full throttle in East Turkistan. One year after the announcement of the OROB, in 2014, the Chinese communist dictate started to build concentration camps in East Turkistan/Xinjiang. Inspired by the Nazis this was the first step aimed at destroying both Muslim and ethnic identity of the people of East Turkistan, and erasing the traces of Uyghur, Kazakh, and Kyrgyz communities in their homeland. Young people who visit mosques are immediately reported to the police. Women who dare wear headscarves are taken away to concentration camps.Over 16,500 mosques have been damaged  in East Turkistan/ Xinjiang so far by the PRC. The technological persecution of Uyghurs through companies like ‘SenseTime’ which build virtual prions for them is also discussed in detail by the author.Xinjiang is now covered by a pervasive network of surveillance, including police, checkpoints, and cameras that scan everything from number plates to individual faces. Since 2016 Muslim Uyghur’s connections living in the diaspora with their relatives in their homeland have gradually started to break off.The Chinese Communist regime is carrying our genocide through concentration camps.

Thousands of Uyghurs have been sent to concentration camps varying from low-level security to high level security. Since 2017 , 1.29 million people have been forcibly taken from their homes. A third of these are in the rural southern part of Xinjiang. Considering that almost 1.35 million people are sent to so called education centers each year, it is thought that almost 4.5 million people have been taken to these camps till date. (pg.150)  Since China does not allow neutral observers to enter the occupied territories, it is impossible to determine the extent of the persecution. Menace outlines the detailed accounts of some Uyghur victims who endured persecution at the concentration camps. China’s facade has begun to crack and reveal the hidden truth behind their so called “vocational training centers” as leaked documents and testimonies of former detainees come to light. China’s false narratives which have, for so long dictated the global discourse have been exposed, substantiating the claims of rape, abuse, torture which are to this day taking place in these facilities. For instance school teacher QelbinurSedik witnessed first hand the systematic assimilation program for children, sterilization operations for women, torture chambers, at the concentration camps. The targeting of the Uighurs isn’t limited to the camps. Since 2016, dozens of graveyards and religious sites have been destroyed. The Uighur language has been banned in Xinjiang schools in favor of Mandarin Chinese. Practicing Islam, the predominant Uighur faith, has been discouraged as a “sign of extremism.”

In the main, ‘Menace’ details the extent of the Chinese Communist regimes devastation of Islamic culture, history, and religious artifacts. More specifically, demonstrating how despite the CCP’s radical efforts in wiping out all traces of Islam and Muslims in East Turkistan the Islamic countries remain silent. Abdulhakim Idris argues that opportunistic economic interests force countries to abandon their religious and moral values in order to function as Beijing’s economic satellites. The Confucius Institutes, which the PRC uses as soft power operate in many Islamic countries, even those who profess sympathy for Uyghur Muslims. Turkey for instance is China’s close trade partner, despite the realities of persecution in East Turkistan. Pressurized by the economic investments of the PRC the leaders of the Islamic countries have remained silent regarding the genocide of the Muslims in Xinjiang.

Menace offers an inside look on the true horrors taking place behind the walls of these 21st century concentration camps and discusses how artificial intelligence is utilized in transforming East Turkistan into George Orwell’s 1984 dystopia. Idris’s contention is that the Chinese Communist Party is akin to a ‘Frankenstein monster’ – communist, capitalist, dictatorial, and colonial which erodes by targeting the vulnerabilities of the countries through deception. The author culminates with a warning that East Turkistan, a place where the Chinese Communist Regime’s desire to rule the world has been piloted succeeds the next step will be to do the same in Pakistan. (pg. 200, 281)

Beijing frames its persecution of Uyghur Muslims as necessary for rooting out terrorism, separatism, and religious extremism. But the aim of China’s actions in Xinjiang is clear: to homogenize Uighurs into the country’s Han Chinese majority, even if that means erasing their cultural and religious identity for good.The repercussions bear heavily even on Uighurs living outside the country. Their burden is more than just raising awareness, and it is this quest which resulted in ‘Menace.’

For last several years a number of news outlets reported on the dire situation of the Uyghur Muslims in China who were being detained in camps for “re-education purposes.” This was followed by in-depth research suggesting that these minority communities are subjected to violence and abuse, modern day slavery and women are subjected to forced sterilization. Chinese Communist Party (CCP) continues to deny these allegations. Despite some international focus, the alleged atrocities did not stop, and did not stop at mass incarceration, forced labor, forces sterilizations and forced abortions. Reports of rape and sexual violence followed. According to a new report by the BBC, “Women in China’s ‘re-education’ camps for Uyghurs have been systematically raped, sexually abused, and tortured.”

Among the testimonies obtained by the BBC, Tursunay Ziawudun, who fled Xinjiang to the U.S., stated that “women were removed from the cells ‘every night’ and raped by one or more masked Chinese men.” She added that she was tortured and gang-raped three times in the camp. There are more stories like that. Indeed, Qelbinur Sedik, an Uzbek woman from Xinjiang who was teaching Chinese in the camp, recalled one Uyghur woman saying that “The rape has become a culture. It is gang rape and the Chinese police not only rape them but also electrocute them. They are subject to horrific torture.” Another teacher, Sayragul Sauytbay, said that guards “picked the girls and young women they wanted and took them away.”

Another woman, Gulzira Auelkhan, testified that the very job she was forced to do was to “remove their clothes and handcuff them so they cannot move. Then I would leave the women in the room and a man would enter – some Chinese man from outside or policeman. I sat silently next to the door, and when the man left the room I took the woman for a shower.” She added that these men “would pay money to have their pick of the prettiest young inmates.”

Torture and physical abuse were also common. Ziawudun, a 42 year-old Uyghur woman testified how she was subjected to abuse: “They had an electric stick, I didn’t know what it was, and it was pushed inside my genital tract, torturing me with an electric shock.”