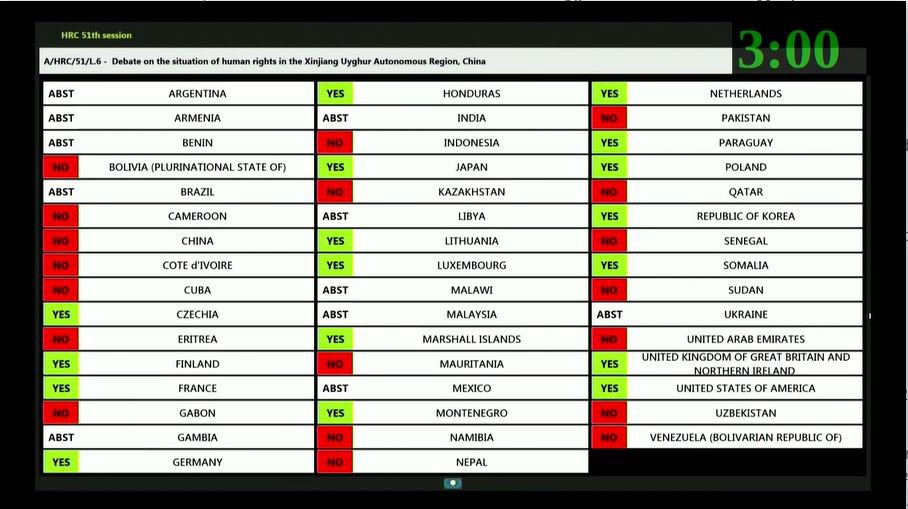 In November 2022, Center for Uyghur Studies joined Islamic NGOs and Mosques to call on the Organization of Islamic Cooperation (OIC) to speak out against China’s genocide of the Uyghur Muslims and war on Islam in East Turkistan.

The letter was initiated after the motion to debate the Uyghur human rights situation at the UN Human Rights Council in October 2022 was defeated, as all the Muslim-majority countries except Somalia voted either against or abstained from the vote. Over 70 mostly Canadian as well global NGOs, Mosques, and non-profit organizations signed the joint letter criticizing the OIC Member States for failing to condmen China’s genocide and religious repression of the Uyghurs, in violation of its Charter’s obligation to “safeguard the rights, dignity and religious and cultural identity of Muslim communities and minorities in non-Member States”.

“We express profound disappointment and sadness after most OIC Member States voted against or abstained from supporting a proposal to discuss ongoing genocide and crimes against humanity facing Muslim Uyghurs in Occupied East Turkistan during a recent UN Human Rights Council session.” The letter said.

Moreover, the letter cited China’s criminalization of Islamic practices, destruction of as many as 16,000 Mosques in East Turkistan, and using religious customs as pretexts to send the Uyghurs to concentration camps such as wearing Hijabs, giving children Muslim names, visiting Muslim-majority countries that include OIC Member States, etc.

Executive Director Abdulhakim Idris said, “China has been criminalizing Islamic practices in East Turkistan for years now. Recently, under the Zero-Covid policy, the Chinese authorities have desecrated the Mosques – that are not demolished  yet – again and used them as quarantine centers. In his New Year address, Xi Jinping said the repressive measures will firmly continue. This is really worrisome. The Islamic World, especially the OIC, as an international organization founded to defend the rights of the Muslims, has to call out the Chinese authorities to stop the genocide and religious persecution of the Uyghur Muslims.”

The Chinese communist regime has always tried to portray a friendly image to Muslims in the Islamic World while it has persecuted the Uyghur and other Turkic Muslims in East Turkistan for practicing their faith. An official Chinese document has even called Islam a “mental illness” in 2017.

A copy of the letter, sent to 60 OIC members, has been published here.