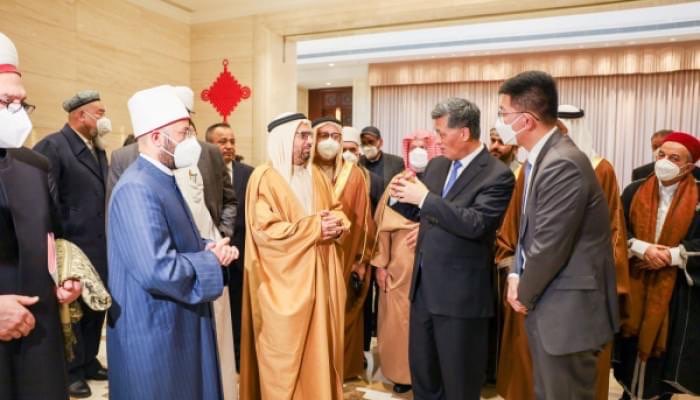 This week, the Chinese authorities took a group of Muslim scholars and academics from several Muslim-majority countries including Albania, Bahrain, Bosnia, Egypt, the UAE, Saudi Arabia, Syria, Tunisia, and Kuwait on a staged visit to Urumchi to cover up its genocide and war on Islam it has been committing in East Turkistan.

Of course, this visit was a part of the large-scale disinformation campaign the Beijing regime has been conducting among Muslims to prevent them from standing up for their fellow Uyghur brothers and sisters. During the visit, the Chinese officials spewed their propaganda and disinformation from the mouths of Muslim representatives deceived by the staged scenes. According to Chinese state media Global Times, Dr Ali Rashid Al Nuaimi, Chairman of the Abu Dhabi-based World Muslim Communities Council, who headed the visit, “spoke highly of the region’s measures on countering terrorism and extremism”. Al Nuaimi also tweeted to congratulate China on the “completion of the counter-terrorism plan in Xinjiang.”

Apparently, the Muslim scholars in this visit have disregarded the UN Uyghur report. In August 2022, the UN High Commissioner for Human Rights published a report on the human rights situation of the Uyghurs that stated the Chinese authorities may have committed international crimes including crimes against humanity in East Turkistan.  Similarly, an earlier report by Human Rights Watch found that China had committed crimes against humanity against Uyghur Muslims in East Turkistan. Within the scope of these crimes, Muslim women were sent to concentration camps for no other reason than covering their heads; hundreds of thousands of women in East Turkistan were forcibly sterilized to curb the growth of Muslim population; Parents who gave Islamic names to their children and taught them Islam were considered criminals and thrown into jail; Men who grew a beard and showed sensitivity to food and drink according to Islamic principles were accused of extremism; Muslim women were forced to share their beds with Chinese so-called relatives; Women in concentration camps were subjected to systemic sexual harassment; Uyghur children whose parents were arrested were sent to orphanages and Chinese families to be raised as communists; As many as 16,000 mosques in East Turkistan were destroyed over the last six years; The Holy Qur’an was burned; Verses were erased from the mosques and replaced with communist propaganda. In a nutshell, the Chinese authorities have tried to erase all traces of Islamic culture in East Turkistan.

Executive Director Abdulhakim Idris said, “We are deeply hurt by the fact that some people from Bosnia where the Bosnian Muslims were massacred during the Srebrenica Genocide, from Egypt, home to al-Azhar University, a prestigious destination for people seeking Islamic knowledge, and from Saudi Arabia, the custodian of the Two Holy Cities, have become tools of China’s propaganda. Today, Uyghur Muslims are facing genocide and a war on their faith on their soil, East Turkistan. However, instead of opening their eyes and facing the truth of genocide, those Islamic scholars have become mouthpieces of China’s misinformation machinery.”

Legislatures of seven countries including Taiwan have recognized the Uyghur Genocide and sanctioned Chinese officials for their involvement in genocide and crimes against humanity. Pointing out that Muslim-majority countries remain silent while many Western countries have opposed the Uyghur Genocide, Idris said, “Sadly, as Uyghur Muslims, we are gone unnoticed by our Muslim brothers. I regret to say that today the Chinese Communist Party has turned a significant part of the Islamic world into its playground. These countries becаme unable to disobey the Chinese regime. Beneath an avalanche of lies and disinformation of the CCP, these countries are ignoring the greatest genocide of the century while it is destroying Uyghurs who believe in the same religion”.

The Center for Uyghur Studies have carried out awareness activities in various Muslim-majority countries including Azerbaijan, Indonesia, Malaysia, and Jordan, and found that a significant part of the Muslim community was unaware of the Uyghur Genocide or held skepticism due to China’s disinformation campaign in the Islamic World. Stating that China is covering up the Uyghur Genocide from the Islamic World through its paid media and infiltrating universities and political channels of influence, Idris said that “the recent attempts to raise awareness among Muslims by Campaign for Uyghurs and Center for Uyghur Studies have triggered China’s reaction. In response to these activities of Uyghur activists in the diaspora, Beijing has taken Muslim scholars to East Turkistan.”

CUS calls on the Muslim-majority countries especially OIC Member States, Islamic NGOs and institutions to stand up against Uyghur Genocide. It is time to put an end to the genocide. Muslim countries must not remain silent when their Muslim brothers are being killed and humiliated by the Chinese communist regime. Otherwise, they will be remembered in history as those who were complicit in the crime of Uyghur Genocide and who left their own brothers forgotten and remained silent despite the war on their own religion.