On religious life, immediately after the occupation in the 1950s and during the “Cultural Revolution”, the Chinese communist authorities imprisoned, exiled, and murdered Islamic scholars and clerics; closed down Islamic schools (madrasas) and banned Islamic education; closed down, converted, and demolished mosques; burned the Quran and other religious books; and forced the Uyghur and other Muslims of East Turkistan to accept communist ideology. These repressions and measures to eliminate Islam from the lives of the Muslims of East Turkistan have expanded to a wider level after 2016. Starting in 2016, the Chinese regime declared that Islam is a “mental illness” and waged a war on Islam; Today, everything that has an Islamic element is banned in East Turkistan and anything Islamic can be used as a pretext by the Chinese authorities to send a Uyghur Muslim to prison and concentration camps. For instance, saying the greeting of peace “Assalamu Alaikum” is no longer possible for the Uyghur Muslims. The Chinese authorities have destroyed almost 16,000 mosques in East Turkistan since 2017 – which the Uyghur Muslims have rebuilt after 1980 -, with 8,500 of them being completely demolished.

To suppress the Uyghur culture and language, the Chinese authorities cancelled the official language status of the Uyghur language in East Turkistan in 1993; imprisoned Uyghur authors and publishers on a wide scale after 2017; forced Uyghur children to learn and only speak Chinese at schools and placed close to a million Uyghur children in state-orphanages and boarding schools, eliminating their opportunity to learn their mother tongue. Furthermore, since 2017, the Chinese authorities have implemented birth control policies including forced sterilization on Uyghur women across East Turkistan to curb the growth of the Uyghur population. In 2018, the birth rate of Uyghurs declined by 84%. Also, in 2016, the Chinese regime launched concentration camps in East Turkistan and locked up millions of Uyghur and other Turkic Muslims where they are physically abused, forcibly indoctrinated and forced to denounce their religion.

Nevertheless, the Uyghurs have never ceased to fight and struggle for their human rights, democracy, and freedom. Thousands of brave Uyghur Muslims including many youths stood up against oppression throughout the decades. During the Barin Resistance, Ghulja Massacre, Urumqi Massacre, and Yarkand Massacre, thousands of Uyghurs spoke truth to power and struggled for their rights and freedom. But the Chinese communist authorities have always responded with brutality and barbaric crackdown on people who peacefully demonstrated their resistance.

Executive Director Abdulhakim Idris said, “If we look back at the past seven decades, we can see that the Chinese regime in East Turkistan has always suppressed the religious freedom of the Uyghur Muslims and always tried to find a way to further persecute them citing various unreasonable excuses. However, what’s more upsetting is that the Chinese communists have been able to deceive the Islamic World to some extent as they tried to portray themselves as an ally to the Muslims, while they are waging a war on Islam in East Turkistan. Muslims around the world need to realize the true nature of the Chinese regime, which is committing genocide against their Uyghur brothers and sisters. The Muslim Ummah needs to stand up for the Uyghur Muslims and show the Chinese communist regime that it cannot abuse Islam and the Muslims”. 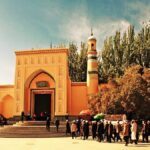 East Turkistan and the Uyghurs