During September 19-21, Executive Director Abdulhakim Idris and Executive Director of the Campagin for Uyghurs Rushan Abbas held activities in London to raise Uyghur Genocide. They have met with Muslim leaders taht initiated and led the Stand4Uyghurs campaign and discusssed future activities to expand the campaign globally.

On September 21, Idris and Abbas visited the UK House of Commons and met with MPs including Afzal Khan, Stephen Kinnock, and Naz Shah, and held discussions on Uyghur Genocide and Uyghur forced labor.

In the evening, the Barbican Centre hosted the screening of the documentary film “In Search of My Sister”, which attracted dozens of notable figures and journalists. During the Q&A session after the screening, Idris and Abbas joined a discussion on Uyghur Genocide with MP Helena Kennedy, Prof. Laura Murphy, and Chloe Cranston, the head of Thematic Advocacy Programmes at Anti-Slavery International. 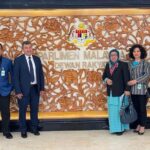